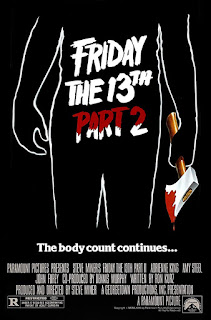 Season 3 - A Long Summer At Camp Blood -
"Then he's still there." He most certainly is. Jason Voorhees scores his first kills of the franchise with Friday The 13th part 2.

- Join the SHV crew as we examine a fan favorite film in the franchise.
- Why this film dispels the myth that hedonism leads to instant death in the Friday Franchise.
- Look at the short lived return of part 1 heroine Alice Hardy.
- Learn about the career of Amy Steel who played Ginny Fields, arguably the best final girl in F13 history.
- The controversy over who was credited as Jason.
- And much more!!