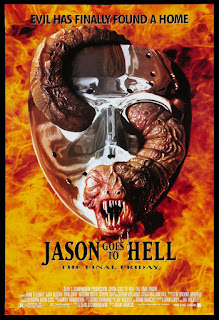 Season 3 - A Long Summer At Camp Blood continues with episode 9 - "Jason Goes To Hell - The Final Friday". Dan & the gang tackle one of the most polarizing entries into the franchise to date in a Friday film that has very little Jason and very little hell but does in fact have a bizarre body jumping storyline, the final appearance of Kane Hodder, and some fantastic gore effects from KNB studios. We also had a 23 year old director, who was a huge fan of the franchise directing his first film and had all of the energy and creativity of youth, but also the inexperience and carelessness that comes with it. All of these ingredients made for a lively discussion to say the least and whether you love or hate this movie, this episode will have something for you.
at August 19, 2019