CFF2020 Review: Attack Of The Demons Is An Unlikely But Earnest Love Letter to 80s Horror. 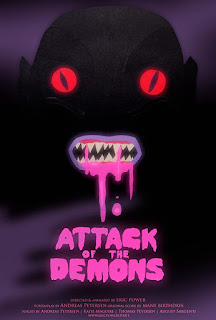 One of the biggest "talent acquisitions" so to speak for the 2020 Chattanooga Film Fest was the addition of Cinepocalypse founder Josh Goldbloom as Artistic Director.  The Chicago based festival has become a can't miss event in recent years and his eye for unique filmmakers is a perfect fit for CFF and adds a lot to the over all vibe.

2019's Attack Of The Demons from Director Eric Power made its debut at Cinepocalypse 2019 to a rousing response and it continues it's momentum right on into CFF. The animation style is very primitive, and done with such a unique flavor it has to be intentional. Of course I couldn't help but make comparisons to the early South Park episodes as many have. Hell it is even about a small Colorado town. I also had some Home Movies flashbacks. There is something beautiful about the simplicity of it, and the creators take full of advantage that. I almost hate to call the animation crude (though I can't think of a better word currently) because it was clearly done in painstaking detail, but that's also part of what makes it ....kind of incredible?

It takes place in the mid 90's, during Halloween, and there's demons and blood and gore a plenty, not to mention great music. While we've been conditioned to accept this kind of animation primarily in outrageous comedies, you will be shocked at how well it works played completely straight. It is as if a wildly creative group of individuals got together and wrote a balls to the wall 80s Evil Dead style demon-tusslin' flick and decided the only thing they had at their disposal to make it was a dude who was amazing at cardboard style animation. The results will leave you grinning from ear to ear. I didn't really know what to expect going into this one and I was just blown away by the creativity on display here and eagerly await what the future holds for these filmmakers.