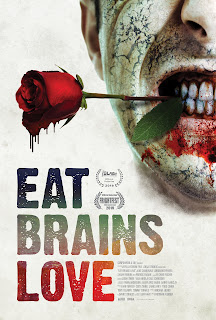 The producers of One Tree Hill meetup with the director of Idle Hands to bring us another film about teenage sex, only this time, they're fuckin' zombies. And yes, that is the correct "they're."

Eat, Brains, Love is an 87 minute ZomRomCom about a stoner and a high school it-girl overcoming stereotypes, eating their friends and running from a mysterious government agency that's hunting them down using a fellow teen with psychic powers. The virus is, as expected, transmitted sexually, but don't expect any sexualized nudity, we are talking about high schoolers, here. Think CW sex scenes. The nudity is saved for a middle aged dude who gets his balls eaten off, but hey, the dick's all yours.
After engaging in *gasp* unprotected sex, but not with each other, both Jake (Jake Cannavale) and Amanda (Angelique Rivera) have unknowingly been infected with a virus that makes them hunger for human flesh. Following a feast of their classmates and finding themselves being hunted by the NCD, the Necrotic Control Division, and their psychic powered protege, Cass (Sarah Yarkin), the duo are saved by a couple of fellow z-bobs who let them know what's up. After snacking on vermin, the hippie/militant zombie power couple present Amanda and Jake with a Thanksgiving worthy meal: an unpunished rapist and child molester. When the meal is over and the flesh is down to bone, so are our gracious hosts, who waste no time getting to it on top of a bloody carcass.

The NCD, meanwhile, is using their mind-reading mädchen to track them down. The only roadblock is Cass' growing fondness for Jake, the only Necro (and possibly teen boy) to ever be nice to her. The NCD Director, Alastaire (Patrick Fabian), uses this against her to get the location of our undead teens, but they've ready fled to Amanda's crazy brother who believes in zombies' house, because of course she has a brother who already believes there's zombies.
Cass can't mind her own business and when she spys Jake and Amanda doing the unskinny bop, she gives the go ahead to do them in. Daddy/Director Alastaire sends in Amanda's experimental attack zombie ex-boyfriend (where'd ya think she got it?) to do the dirty work, but it doesn't go to plan. Escaping out the back, Cass' partner Tom (Jim Titus) shoots Amanda and attempts to take out Jake, which prompts pleas for mercy from Cass... Amanda takes advantage of this distraction and rips out Tom's throat. Daddy Alastaire doesn't care about Tom, and Cass has had enough. She flees to the woods and finds Jake, who only wants to find Amanda, so she uses her abilities to lead them to the NCD labs, make a shout out to Star Wars, and rescue the zombabe. Oh, and release ALL the hangry "necros" they've had locked up for who knows how long. The final boss level was surprisingly easy, and Alastaire goes down in a bloody spray. Our trio hop in a car and head to Iowa, where there is a rumored cure, but all they find is the weird, fur-clothed girl named Mazzy (Xena Zeit-Geist) that Jake got freaky with, and all her friends.

The gore is aplenty, from a lunch room body buffet to the aforementioned old dude's castration, and the use of both practical and CG effects were well balanced. Cass, the psychic teen zombie hunter, gives off strong Eleven-Meets-Liv vibes, while Jake and Amanda are representing Bizarro World Zombieland with their Road Trip to Safety. If this sounds like a ridiculous mashup with a twist on every zombie movie you've ever seen... you'd be right, but it works somehow.