By The Rev Dan Wilson 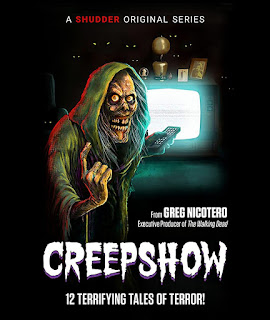 While they may not be for everyone I certainly love me a horror anthology (as you heard on the latest episode of Seeking Human Victims covering John Carpenter's Bodybags (1993), available now!)  and Creepshow as a brand would certainly be on the Mount Rushmore of great horror anthologies. Even better yet, Creepshow spawned an entire franchise. Creepshow 2 held it's own as a sequel that is equal to, and in the eyes of some greater than, the original. Ok, so we all got hit with the Men In Black memory wipe after we saw Creepshow 3 (Really a Creepshow film in name only), but oh have ya heard the good news? it has returned to glory in television series form thanks to the almighty Greg Nicotero, AMC Networks, and Shudder. The first season debuted over the fall of last year and at least in my opinion it completely rocked. I mean it hit me right in the nostalgia. I tuned in with wide eyes and a maniacal grin every week as soon as The Creep popped up on my TV.   Tom Savini is involved, Joe Hill is involved, of course Stephen King is involved. There are comic panels during the transitions, cameos by horror icons, plenty of references and shoutouts, and basically everything you could want in a Creepshow TV series. It was so popular that it actually got a re-airing on live TV via AMC during the current content drought and a 2nd Season is in the works.

So the fine folks at Chattanooga Film Festival teamed up with Shudder to bring us an Exclusive Preview of the Director's Commentary on the Gray Matter/House With The Head episodes that will be featured on thh Creepshow physical media release on Digital HD, DVD & Bluray coming out on June 2nd.  We're going to talk about the commentary on the "Grey Matter" portion.  Not really sure how you "review" a commentary but I can talk about some of the things I found interesting.

The commentary was provided by Philip DeBlasi (co-writer along with Byron Willinger) along with Showrunner Greg Nicotero. Some of the highlights included Nicotero explaining that The Crate in the intro is the original "Crate" from the first movie. Greg got it from Tom Savini and wanted it to be the way we're introduced to the new chapter. He says the entire episode is full of Stephen King references and in-jokes up to and including the casting of Adrienne Barbeau. He goes through each of them but of course of we don't want to spoil them ahead of the Blu Ray release. Greg called in favors to get Esposito, Bell, and Barbeau.  We get a nice look at why certain camera angles were chose to help convey the story progression as it spirals out of control.  They talk in depth about each character's motivation and we got some insight into things that may not have necessarily been spelled out in the episode. We also got a lot of info about the locations they used to shoot, all in the metro Atlanta area. He explains how this episode had more digital effects than most of the other episodes, they actually got extra money to make it and they praised the Sound Design as being key to making the episode work.

I know Greg is mainly known to mainstream America as "Walking Dead" guy now, and that's an amazing legacy to leave in it's own right but I'm not sure we as a horror community quite recognize the level of greatness we have still with us in him. In each of our podcast episodes when we're examining these all time classic horror films, time and time again it was Greg and K&B that did the effects work. Not only that, he went on to become a director and showrunner. He transitioned from an all time great special effects artist, to an all time great overall creator, leader and storyteller. These commentaries will be things that horror fans and aspiring filmmakers will be studying decades down the road.  I can not wait for Season 2. I've heard the names of a few of the filmmakers who are slated to do episodes and it is exciting stuff, so here's to holding out hope that it doesn't get delayed for too long. In the meantime you can stream it right now on Shudder, watch it on TV via AMC, or buy your own hard copy for your shelf on June 2nd with a boatload of bonus features including the commentaries featured here.
at May 25, 2020