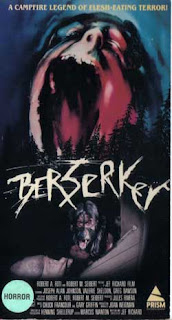 The good folks at Vinegar Syndrome provided a few films for this years Chattanooga Film Festival and one of those was 1987’s Berserker, directed by Jefferson Richard. Released for the first time on Blu-ray by Vinegar Syndrome in 2019, Berserker is the tale of 6 young friends who rent a cabin in the woods so that they can party only to find out there is something dangerous lurking nearby. If this premise seems familiar to you then you are right, it is.  What makes this film different than the other billions of cabin in the woods 80’s slashers? This one includes a fight between a giant bear and a man-bear-Viking, aka a berserker.

The film starts with a little backstory. We learn that berserkers were Viking warriors who dressed in animal pelts during battle. The berserkers were cursed and would live like actual wild animals, which including eating humans, and couldn’t actually die until they passed on the berserker curse to a descendant. So right of the bat its safe to say that someone in this film is secretly a berserker. As the film proceeds a giant bear also appears and we are left to try and figure out if it is the bear or berserker who is doing the killing.

I must admit that the middle of this film does become a little dull at times. The campers themselves do not have a ton of personality and the humor that is possessed by so many of my favorite 80’s slashers is missing here. So many other slashers that  would have been forgettable were saved by great practical effects and I think that’s a big reason that Berserker stayed only available on VHS for so long and was almost forgotten. The gore and effects in this film are very minimal. However, there are a couple of interesting side characters, particularly the camp owner Pappy. Played by the always entertaining George Buck Flower, Pappy warns the campers to be careful, that there are wild animals in these woods. He is not kidding.

When we finally get to the final 15 minutes the shit really starts to go down. That’s where it is finally revealed that the berserker is responsible for all of the killing and that the big ass bear has been trying to protect the campers the whole time. We get a long bear vs. berserker fight scene, one that by itself makes this film memorable.

Even with its flaws Berserker was a lot of fun. The opening and last 15 minutes of the film made it one worth watching and for us slasher completists, one worth owning too. I have all kinds of films in my collection but none with bear fighting a Viking dressed as a bear. That will be remedied soon. 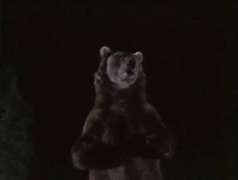