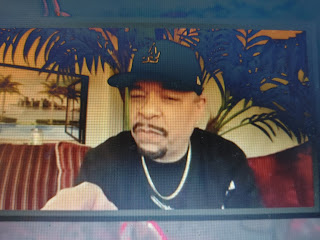 Legendary actor, rapper, heavy metal frontman, producer, author and pop culture icon Ice-T sat down with Cinepocalypse Founder Josh Goldbloom for a fascinating and candid conversation about the 1994 action thriller "Surviving The Game" and more at the first ever virtual edition of the Chattanooga Film Festival. 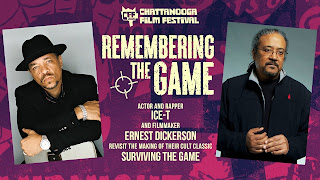 This was originally slated to be T and director Ernest Dickerson (Juice, Bullet Proof, Demon Knight, Bones) but Dickerson didn't appear which was unfortunate and we hope everything is ok with him. (The CFF organizers have stated they will try to get Ernest back later in the weekend.)  Ice-T certainly made the most of now being the sole subject of the interview, however, as he dazzled us all with a number of tales from the set of the film, as well as his acting and music career and life in general. 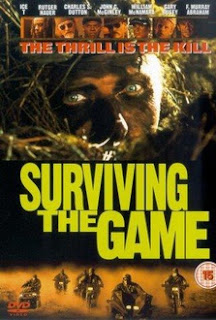 Just a few of the highlights included:

-  Talking about his relationship with Gary Busey. He became friends with Gary when the cast went out to a local bar during country western night during the shoot. He said Busey loved him because T was the only person who would indulge his wild conspiracy stories about the CIA living inside our TV sets, etc. He said Busey actually rewrote the entire monologue his character in the film performs at the dinner table right before the hunt begins. T said there was a minor confrontation between Busey and Dickerson over it, who told him he couldn't just re-write the script. Gary persisted and got his way and wouldn't you know he ended up knocking it out of the park.

- He said Rutger Hauer was a consummate professional but he never broke character the entire time they filmed and in fact he actually lived in the same cabin his character did during shooting, He also remarked that Hauer was a very large man and that he didn't quite realize that until he had to do fight scenes with him.

- He said F Murray Abraham asked him if he'd ever had any acting classes and he said no. Abraham told him never to take one because it would interfere with his method. He told him he had "it" and that teachers would just make him question his amazing natural instincts. T said he followed that advice most of his career and it served him pretty well as he's now one of the longest running live action actors in a series on Law & Order. He did make sure to re-iterate that he only plays a cop on TV and is definitely not a cop. T said he doesn't even really have a "method" necessarily and that he really learned to act by having to go in front of a judge.

- T cited Bruce Lee and Blacksploitation actors like Fred Williamson and Jim Kelly as some of his primary acting influences.

- He talked briefly about Body Count, and said he got into heavy music at a young age thanks to the influence of a family member. Like most of us who love metal, he discovered Black Sabbath and it was over from there.

- He talked a bit about working with Ice Cube in the film TRESPASS and praised that experience mentioning that he was already close with Cube and he got to work with the legendary Walter Hill as well as legendary actors like Bill Paxton and William Sadler. T went on to reflect about how much fun Bill Paxton was and how fond he was of him and that we still feel the pain of his loss today.

- T said he's accomplished most everything he set out to do in life so now it is about finding the balance of stopping to smell the roses and enjoying the fruits of his labor with trying to find new things that spark him creatively. He says he's working on the first ever animated blacksploitation film called Tech City and that Dr. Dre and Snoop Dogg are involved.

Honestly this was a certified hoot. I'm a big fan of Ernest Dickerson and while he was sorely missed, I couldn't imagine being more entertained than I was posting up and listening to Ice-T sit there and tell me stories like we were having a beer at the bar together. Experiences like that are what sets this festival apart.

You can currently pick up the new Body Count album "Carnivore' available now from Century Media records. Available on Spotify, Apple Music and more and you can see him in future seasons of Law & Order:SVU when it returns to television in the fall.