CFF2020 Review: ‘The Beach House’ is a familiar premise told with a modern twist in Jeffrey A. Brown’s directorial debut. 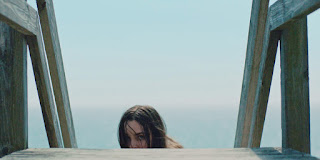 
A fog/mist rolls in off the ocean but this time it’s not filled with lepers looking for stolen treasure or monsters from another dimension. It’s filled with, well, something else. Trying to figure out what is in the fog and how to survive it is the basic problem that our central characters must deal with in Jeffrey A. Browns The Beach House.

The film starts with couple Emily (Liana Liberato) and Randall (Noah Le Gros)  taking a vacation to the beach. When they show up to Randall’s families beach house they are in for a big surprise when they find that a strange couple has already taken up residence there for the weekend. The couple claims to be friends of Randall’s father and have permission to be there. This is a great set up, as your mind immediately races with all the possibilities of who these people may be. Are the strangers who they say they are? Are they crazy murderers? Are they pod people? Granted, the number of scenarios you think of is probably dependent on how many horror/sci-fi movies you’ve seen. If you are reading this, I’m guessing its likely a lot.  This set-up really sets the mood for what is to come.

The constant tension that starts in the opening scenes is built upon by a lot of great story choices throughout the film. There is clearly a strange fog approaching but the couples have all eaten edibles, so they are not able to accurately assess the dangerous situation. They all feel sick the day after the fog has come but this could just be the aftereffects of a bad trip. Jane (Maryanne Nagel), part of the strange couple already at the house, seems particularly sick, but its already been clearly established that she was sick to start with. All the strange things happening seem to have plausible explanations that help to distract our characters from realizing that there is something very wrong until it’s too late.

The filmmakers use the setting of the beach to its maximum potential. The scenes on the beach are bright and beautiful, which really is a great contrast to the horror that is unfolding before our eyes. If you aren’t a fan of films that are more atmospheric than action oriented, then fear not. There is also a great body horror scene and some good-looking monster effects later in the film.

The Beach House is also really carried by a couple of really good performances, particularly by lead Liana Liberato. Her portrayal of Emily is really central to the film’s success. Emily is smart and capable. Her background as a chemistry major gives her more insight into what is happening with the fog as she is the first character to realize the danger she is in. The movie does a great job of building up the characters before the shit really hits the fan.

Despite being a familiar premise, The Beach House is different enough that I found it very enjoyable. This atmospheric eco-horror/sci-fi film is one that I would recommend to anyone who loves their horror abstract and loves to leave a movie with more questions than answers.